So you want to know how to play darts? Although there are a number of variations of darts that can be played, the most common games are cricket and 501. We’ll explain the rules of each of these games, how to score and a couple of other variations you might enjoy. The first consideration is hanging your dartboard. 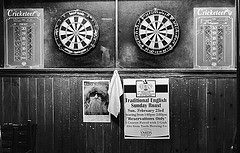 Darts by Ted Van Felt is licensed under CC BY 2.0

Although you can certainly hang your board any way you like, if you want it to be consistent to what you would experience in a pub or official tournament, the bulls-eye should be 5 feet 8 inches off the floor and the throwing line should be 7 feet 9 ¼ inches away.

How to Play and Score a Game of Cricket

Cricket is the most common pub and home version of darts. It’s fun because there is an element of strategy that can give a beginner a chance to beat a more experienced player. Here’s how to play cricket:

#2 As you play, you target only the number segments of 15 through 20 and the bulls-eye. Your goal is to “close” each of those six numbers then get a double bulls-eye. When you get three of that number, you close it.

For example, if you closed your 20s on a prior turn but your opponent has no 20s or less than three, they are not closed.

On your next turn, you can try and throw more 20s. You score 20 for each dart that lands in a white area under the 20 and double that for the double ring, triple that for the triple ring.

Once your opponent also closes out their 20 spot, any further 20s thrown don’t count for anyone.

#4 You can go through the numbers in any order, but going for the 20s first sets you up for a higher possible score. To close the bulls-eye, you throw both an inner and outer bull. Strategy is important in cricket because you need to make wise decisions on which numbers to go after. 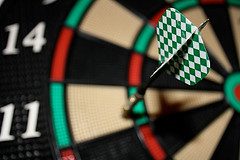 Darts by Nico Jensen is licensed under CC BY 2.0

For example, if your opponent closes their 20, you can either try and finish out your 20 to block them from scoring or try to close your 19 so you can score in that segment if your opponent hasn’t closed it.

To mark a dart that lands in a target number, you write a slash beside it “/”. When you hit your second of the number, cross it with another slash to get “X”.

When you hit your third of a number, you circle the X. This indicates you closed that number.

When you score points for landing darts on a number you’ve closed but your opponent has not, write these out to the side and keep a running total.

#6 To win, you must close all of your numbers and have the higher score. You only score points by landing a dart on a number you have closed out and your opponent has not.

If you close all your numbers but are behind in points, you throw on non-closed numbers until your score beats your opponent or until they close out all their numbers and beat you with their higher score.

How to Score a Basic 501 Darts Game

In a game of 501, your score starts at this high number and each throw is deducted from that. The winner is the first one to reach exactly zero. When you hit zero it’s called “checking out.”

A game of darts is usually played by two players facing off (301 is a faster variation of the game). If you decide to play with competing teams, the starting score is increased to 701 or 1001.

Electronic sets will score for you. With a traditional set, you score with chalk on the scoreboard by hand. 01 games are common in both home play and tournaments. Here’s how play proceeds.

#1 Each player throws three darts and they add up the score for that turn then deduct it from the starting score. On subsequent turns, subtract your throw from your declining subtotal.

#2 The outer thin ring of the board is the double ring. The inner thing ring is the triple ring. If you land in one of the white spaces, you score the number that’s at the outer edge (between 1 and 20).

If you land on a double or triple ring space, you multiple that outer number by 2 or 3. Thus, the highest score you can get in a three dart turn is 180 if you can land three darts on the triple ring of the 20 segment.

#3 Play proceeds turn by turn with the scores gradually reducing toward zero. The inner bulls-eye is worth 50 point and the outer bulls-eye ring is worth 25.

The fastest you can win the game is with three throws totaling nine darts. If you get triple 20 on two turns then 141 on your last, you hit zero. 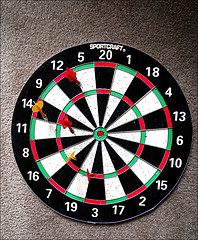 Darts by Rafael Castillo is licensed under CC BY 2.0

#4 The final throw is critical, because you must hit a double on one of your final throws and you cannot go below zero or end up with a score of just 1.

This is called “going bust.” If you go bust, your score reverts to what it was prior to the turn and your turn ends even if you have darts left to throw.

If your opponent doesn’t get to zero, you can try to win again on your next turn.

#5 A darts match is made up of several individual games (these are called legs).

Usually a match is the best three out of five legs but you can decide at home how many legs you want to play – just pick an odd number to avoid a tie.

There is a wide array of game form for darts and you may even develop your own customized play – your “house rules” – but below are some of the most common variants of the game:

Double start – This can also be called doubling in and it means that your score doesn’t begin counting until you land a dart in the double ring. You can do a double start on a 01 game or cricket. You can also require a double to end the game to make it more of a challenge.

Round the clock – Also called around the world, this is when you hit the numbers in sequence, 1 through 20. Another form of this game called 20 to 1 requires you to end with an inner or outer bulls-eye.

In any variation of darts, if you make an arithmetic error on your score, it will stand as written unless you or your competitor recognize the mistake and fix it prior to your next turn.

When you’re ready to have your own darts set to play in your home, come to Black Pine Spas to check out our traditional and electronic dart boards. You can try out different types of darts and dartboards at our showroom in Edmonds, just outside Seattle, WA.

We match local competitor prices by 10% and can ship anywhere in the continental US. Call us at (425) 771-5774 with any questions and our expert staff will be pleased to assist you.